The ultimate gift for the die hard Viking Fan

Embark on an authentic Viking adventure with this collection of true and some fictional accounts, or stories, known as Sagas, of the legendary men and women who settled in the farthest corners of the Northern world.

Honour. Righteousness. Right, wrong and justice. Midnight raids. Voyages of discovery. No Hollywood. Experience Viking life as it really was. All from the comfort of your armchair. 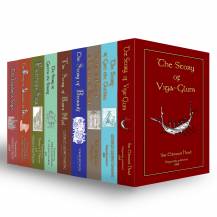 9 of the most popular titles from the world of Viking Folkore...

The Story of Viga Glum

Viga-Glum, or "Murdering Glum," the hero of this story, is not by any means a perfect character. When he had to achieve a purpose he was thoroughly unscrupulous; neither blood nor false oaths stood in his way - just what one would expect from a Viking.

The Story of Gisli the Outlaw

In a time when the law of Iceland had not yet been established, when men were ruled by their conscience, Gisli, a champion of Iceland, was outlawed for murder by the Chieftain Bork at the Thorsness Thing (council). On the run, how would his story end?

The Life and Death of Cormak the Skald

This is the story of a poet, poor and proud. He loves a fine lady, who bewitches then jilts him. In true Viking style Cormak fights and kills for his love, writes verse for her, and rises, for her sake, to the height of all that a man in his age could achieve.

The Story of Beowulf

The Story of Burnt Njal

Of all the Sagas, none were so interesting as Burnt Njal, whether as regarding the length of the story, the number of ranking chiefs who appeared in it as actors or the graphic way in which the tragic tale is told. What would be Njal's fate?

The Saga of Grettir the Strong

As a child, Grettir is rebellious and bad-tempered. He is described as red haired, freckled, and broad around the eyes. But he is also courageous. He takes on and defeats a draugr, the Norse equivalent of a zombie. But in doing so, his life takes an unexpected turn...

This is one of the most important Icelandic sagas, originally written in Old Icelandic around the year 1245 AD. Enter the world of the Salmon River valley and the clan of the Laxardalur, dominated by a blood-feud between two sides of a great dynasty.

Story of the epic love of Fridthjof and Ingeborg, that would not be denied. Banished, subject to tribute and arranged marriages, but united at last. So good is this book it has been printed in just about every European language and even has an opera set to it.

The Story of Howard the Halt

A story of how ordinary men banded together to overcome tyranny, embodying the eternal search for love and justice amidst a world full of jealousy, spite and injustice. Be warned: in the case of Howard the Halt, justice is dealt out the Viking way.

This book was especially republished to raise funds for these charities & many more...

33% of the publisher’s profit from the sale of this book will be donated to charities.