This book was especially republished to raise funds for these charities & many more...

33% of the publisher’s profit from the sale of this book will be donated to charities. 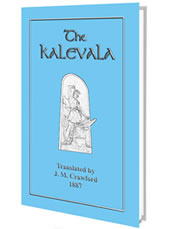 The following translation was undertaken from a desire to lay before the English-speaking people the full treasury of epical beauty, folklore, and mythology comprised in The Kalevala (the Land of Heroes), the national epic of the Finns. The Kalevala describes Finnish nature very minutely and very beautifully. Grimm says that no poem is to be compared with it in this respect. A deeper and more esoteric meaning of the Kalevala, however, points to a contest between Light and Darkness.

The numerous myths of the poem are likewise full of significance and beauty, and the Kalevala should be read between the lines, in order that the full meaning of this great epic may be comprehended. The whole poem is replete with the most fascinating folk-lore about the mysteries of nature, the origin of things, the enigmas of human tears, and, true to the character of a national epic, it represents not only the poetry, but the entire wisdom and accumulated experience of a nation.

One of the most notable characteristics of the Finnish mythology is the interdependence among the gods. The Finnish deities, like the ancient gods of Italy and Greece, are generally represented in pairs. They have their individual abodes and are surrounded by their respective families.

The Sun and the Moon each have a consort, and sons and daughters. Only two sons of Pćivć appear in The Kalevala, one comes to aid of Wainamoinen in his efforts to destroy the mystic Fire-fish, by throwing from the heavens to the girdle of the hero, a “magic knife, silver-edged, and golden-handled;” the other son, Panu, the Fire-child, brings back to Kalevala the fire that bad been stolen by Louhi, the wicked hostess of Pohyola.

…Then the blacksmith, Ilmarinen,
The eternal forger-artist,
Laid the metals in the furnace,
In the fire laid steel and iron,
In the hot-coals, gold and silver,
Rightful measure of the metals;
Set the workmen at the furnace,
Lustily they plied the bellows.
Like the wax the iron melted,
Like the dough the hard steel softened,
Like the water ran the silver,
And the liquid gold flowed after.

Then the minstrel, Ilmarinen,
The eternal wonder-forger,
Looks within his magic furnace,
On the border of his oven,
There beholds the fire-sword forming,
Sees the blade with golden handle;
Takes the weapon from the furnace,
Lays it on his heavy anvil
For the falling of the hammer;
Forges well the blade of magic,
Well the heavy sword be tempers,
Ornaments the hero-weapon
With the finest gold and silver.

Wainamoinen, the magician,
Comes to view the blade of conquest,
Lifts admiringly the fire-sword,
Then these words the hero utters:
"Does the weapon match the soldier,
Does the handle suit the bearer?
Yea, the blade and hilt are molded
To the wishes of the minstrel."

On the sword-point gleams the moonlight,
On the blade the sun is shining,
On the hilt the bright stars twinkle,
On the edge a horse is neighing,
On the handle plays a kitten,
On the sheath a dog is barking.

Wainamoinen wields his fire-sword,
Tests it on the iron-mountain,
And these words the hero utters:
"With this broadsword I could quickly
Cleave in twain the mount of Pohya,
Cut the flinty rocks asunder."
Spake the blacksmith, Ilmarinen:
"Wherewith shall I guard from danger,
How protect myself from evil,
From the ills by land and water?
Shall I wear an iron armor,
Belt of steel around my body?
Stronger is a man in armor,
Safer in a mail of copper."

Contents of The Kalevala